A farewell to arms 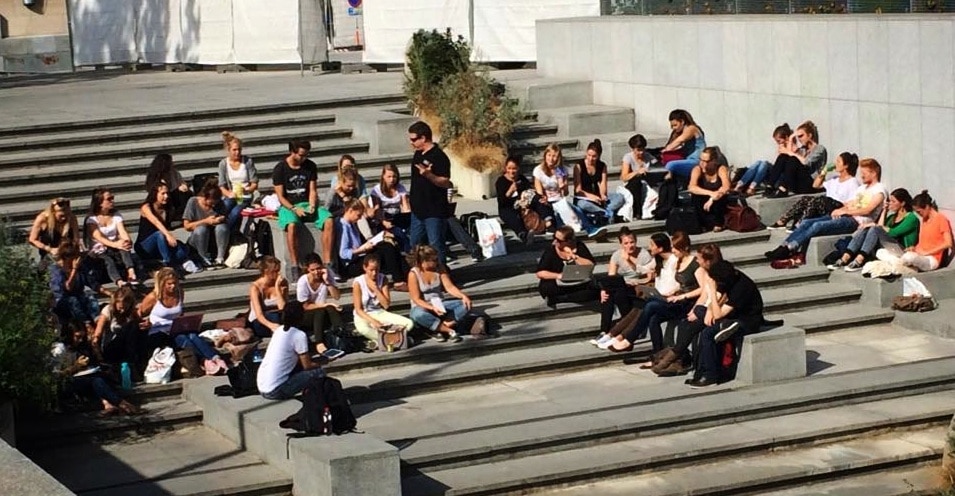 Last June, the president of the PR section of IHECS called me in his office. When I got in, he had a sad little smile on his face. He told me that the « décret Marcourt » had initiated a revamping of the programme and that some teachers had to go. Sadly, I was one of them. Bummer.

I’m not the type of guy who dwells on things past. And, to be honest, I would probably have left a few years later. To me, teaching is a passion, a fire that wants to spread. The kind of thing that puts a smile on your face when you get up in the morning, and it’s « that » day again. And I always made a promise to myself: that I would put an end to any teaching gig the minute the fire died. Unfortunately, the fire hadn’t died just yet.

And IHECS gave me fuel to kindle that fire!

I was given the chance to teach to students in the 1st and 2nd year of the Master’s degree in Public Relations. Young, motivated students, with actual brains and a personality, often demanding (and rightly so), and eager to learn (or so I thought, anyway).

Even better: the two subjects Pierre de Villers kindly entrusted me (a thousand thanks for your trust, Pierre), were just the thing: marketing communication (with a mission to talk about digital marketing) and communication on the business plan. Cherry on top: I could do whatever I want to teach them. So I put all my heart in them. I made experiments; I searched. Sometimes I failed, sometimes it was a success. But I don’t regret any single moment.

But it’s not the saddest part

However, having to stop teaching these subjects is not the worst, notwithstanding the fact that I will miss these rooms packed with students (who sometimes slept, I have to confess). Or the outside lectures I sometimes gave on the Mont-des-Arts on sunny afternoons. Even now that sunnier skies have in the meantime agreed to host my teaching errands and provided me with a new and fascinating business ad marketing culture to study.

The saddest thing of all is letting go of dissertations. I loved directing final papers. It’s probably the less lucrative job on earth (even my housemaid is paid triple what teachers receive to do that) but it’s by far one of the most exciting. The chance to embark with a young student on an intellectual trip full of discussions, passionate exchanges, laughter and good mood. And I really do think what I wrote! Now, to be honest, this is about 30% of the theses I supervise each year. There are 50% average papers and 20% « difficult » ones. But the 30% largely compensate the other 70%. Dedicated students, who chose their subject carefully and were passionate about it. Who came to me because I was considered a specialist in a field linked to their research (or were told I was, like Amandine and Quentin). They had ideas and enthusiasm galore! Sometimes, I was also part of a jury who would have to grade one of those exceptional papers, and had the chance to meet another dedicated student and a teacher beaming with pride at his student’s work (get my drift, Diego?).

This year, I felt like a spoilt child: 50% of the papers I was supervising were just vibrant ventures, focused on fascinating topics. And I sometimes wondered whether this bunch of über-motivated students were high on something (I fancy it was knowledge). So I wanted to take a little time to thank them properly for making the sun shine over my last months at IHECS.

Max, Amandine, Quentin, from the bottom of my heart, thank you! I love you, guys!

P.S. And while I’m at it, I have other students to mention: Diego, who became a business partner, Sandrine, my first trainee, Gilles, the cliffhanger, Dafne, the efficient job student and, of course, Eli, the most student_praise student_function who ever worked at company_name !